Ranking political leaders is a tricky matter. Forbes’ list of most powerful people recently put Russian President Vladimir Putin ahead of “the handcuffed” Barack Obama, with German Chancellor Angela Merkel trailing closely behind. But can one really compare individual leaders and their power across different political systems? 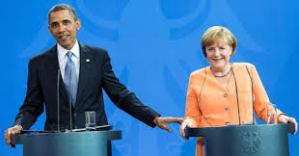 Obama: “I checked the pictures on Angela’s smartphone. She has no selfies”. – Photo German government

Let’s start with Obama versus Merkel. Democracies are often lumped together and opposed to authoritarian regimes. But this ignores the wide variation between the countries within the democratic family. Germany is a consensus democracy based on a proportional electoral system. While the US President often comes into office with less than half of the popular vote (or with just over 50% as currently for Obama), the parties forming a German government have usually the support of large majorities. The German executive controls policy-making and legislation, whereas forces in both executive and legislator determine the American President’s agenda. The White House is expected to beg and cajole legislators, or defers the initiative to Congress as with the mini-budget deal this week. Such a situation would be unthinkable in Germany.

Under Merkel Germany’s economy has boomed. Her 2013 election result END_OF_DOCUMENT_TOKEN_TO_BE_REPLACED