Wednesday, on a flight from Brussels to Boston, the NSA agent sitting next to me had a transcript from a telephone conversation between Herbert Landau, who is a judge on Germany’s Federal Constitutional Court, and Mario Draghi, President of the European Central Bank.

For non-Euro buffs, the German Court said last week that Draghi’s offer in 2012 to buy as much government bonds on the financial markets as he saw fit, which is widely claimed to have brought down the Euro crisis from scary heights, was most likely illegal under European Union law. But the final ruling will only come after the European Union court had its say. 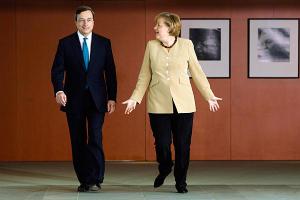 Angela Merkel: “I usually do whatever it takes to avoid Karlsruhe rulings.”

Herbert: “Can I speak to Mario Draghi?”
Mario: “Speaking.”
Herbert: “What did you mean when you said you would do whatever it takes to preserve the Euro?”
Mario: “That I was ready to defend the Euro, no matter what.”
Herbert: “Is it really your job to defend the Euro?”
Mario: “Excuse me?”
Herbert: “Is that within your mandate, defending the Euro?”
Mario: “I would think so, I am the Central Banker.”
Herbert: “I see. I am the Constitutional judge of your largest shareholder.”
Mario: “I am the lender of last resort. It must be within my mandate to put up the last defence when markets attack. Markets are driven by animal spirits. I need to tame them.”
Herbert: “I am a constitutional judge; my job is to tame you. Did you act within the limits of your mandate? Did you consider more limited approaches to taming those markets?”
Mario: “Either the lion eats me, or I eat the lion. And to kill a lion I prefer a bazooka.”
Herbert: “You could use a handgun for that, no?”
Mario: “I have not one single animal in front of me. It is more like a herd of wildebeests. Once an invisible hand sets them running, they trample everything that is in their way.”
Herbert: “How can you tame what is not visible?”
Mario: “I am a central banker, it is what I do.”
Herbert: “Whose money will you use to buy all these bonds? I started life as an apprentice in my parents’ baker shop. We needed to save before I could buy something.”
Mario: “That is the beauty of my job. I don’t need money to buy stuff.”
Herbert: “Excuse me?”
Mario: “I put it on my balance sheet.”
Herbert: “You mean you are cooking the books, like the Greeks did?”
Mario: “No not the books. Just a sheet.”
Herbert: “The law does not allow you to change a sheet whenever you see fit.”
Mario: “Not whenever I see fit. Only when the interest rate breaks down, or rather its transmission to the real economy.”
Herbert: “The transmission is broken because of bad national policies. It sounds like you are doing economic policy.”
Mario: “Somebody needs to get his hands dirty to solve this thing once and forever.”
Herbert: “So you admit you are doing economic policy; that is ultra vires!”
Mario: “I am not an ultra. I am careful by nature. Have you ever listened to one of my press conferences? I am so cautious that people get confused by what I say. Ultra’s don’t become central bankers.”
Herbert: “No, you are not an ultra. You are overstepping the boundaries of your powers.”
Mario: “I have not done anything yet. I changed the crisis just by saying that I am willing to buy bonds. My monetary policy will only work when Italian pastamakers can borrow at better conditions.”
Herbert: “What about German bakers?”
Mario: “They already borrow at ridiculously low rates.”
Herbert: “Gotcha. You admit that this policy is for some countries only. So it cannot be monetary. The Italian government should solve this, you are not superman.”
Mario: “I don’t want to be superman. If a government does not play ball, I do nothing.”
Herbert: “Gotcha, again you cannot make your monetary policy conditional on who happens to govern Italy. Beside all of this is too risky. What if the governments cannot pay you, who will reimburse you?”
Mario: “My balance sheet.”
Herbert: “I don’t trust that answer.”
Mario: “There are times that I don’t trust it myself. But as long as markets trust it we are fine. It is called capitalism.”
Herbert: “It sounds like alchemy. Your job seems to be difficult enough already. Just leave the job of saving the Euro to the countries.”
Mario: “I agree. But let’s make sure monetary policy gives them some time to do so. Maybe you and I should have dinner one day. We both have jobs where we need to second-guess other people’s motives and intentions.”
Herbert:”Good idea. I love pasta al pomodoro, with dark bread to scoop up the sauce.”
Mario: “I know just the place.”