Let’s assume that House Republican leader John Boehner is a reasonable man, as Democrats repeatedly say. Let’s also assume that he wants a Republican candidate to win the 2016 presidential elections. His behavior in the shutdown saga so far undermines these two assumptions. What then does Boehner value most in today’s crisis management? It must be the unity of his Republican caucus in the House. But chasing that value damages Republican prospects for future elections. 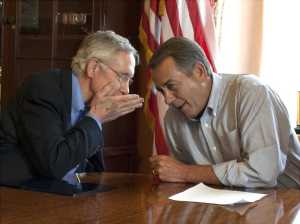 In the 2012 fiscal crisis, Boehner was outvoted when a majority of House Republicans pulled him back from a compromise with Obama on more taxes for the rich in exchange for expenditure cuts. Today, off the record Republican statements illustrate uncertainty about their end game. The Speaker is floating in order to avoid antagonizing some of his own members. On Sunday morning, ABC’s Stephanopoulos confronted Boehner with his statement of a few months ago, in which he said that mixing Obamacare into the budget talks would shut down the government which is “not our goal”. Unity of caucus has overtaken all other goals.

Boehner, without having a clearly defined purpose, is hard to negotiate with. We know that he is willing to raise the debt ceiling. The Speaker knows that undoing Obamacare is not on the table, so the end game must be some measures towards smaller government that Democrats can accept in a wider deficit reduction deal.

The alternative is continued paralysis and, further down the road, outright economic disaster for the US and the rest of the world. House Republicans will have to come to terms with the fact that powers are shared with Democrats. Hence, maintaining Republican unity in the House is a losing strategy, unless Boehner is willing to see what happens when the US defaults. A compromise will inevitably upset the Tea Party after having raised huge expectations, as today’s spectacle results from a carefully planned mobilisation to derail Obamacare.

When Mitt Romney lost in 2012, Republican strategists quickly pointed out that the party was out of tune with a changing America. Of all demographics, Romney only won white men. The majority of young people, women, Latino and other ethnic groups voted for Obama, as did 56% of moderates (as opposed to liberals or conservatives). Today’s challenge for Republicans is to convince members of these demographics to switch sides in 2016. The best way to do so is to help govern effectively and drop their current campaign mode. Boehner acting like a reasonable guy would opt for authenticity when exercising leadership and follow his own convictions.